Is Microsoft Forefront Protection 2010 for Exchange Server x86 or x64? 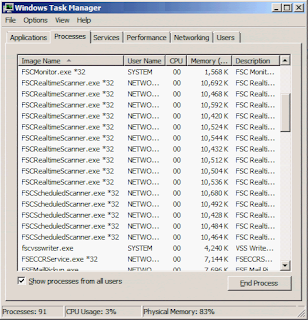 After installing Forefront Protection 2010 for Exchange (FPE), I ran Task Manager to see what processes were running. I was surprised to see almost all of the Forefront processes are 32-bit. I asked Microsoft why this is, since Exchange 2007 and Exchange 2010 are 64-bit only applications.

It turns out that this is because the antivirus engines are still 32-bit. FPE uses up to five different scan engines from different vendors to scan emails (Authentium, Kaspersky, Microsoft, Norman, and VirusBuster). The AV vendors are working to create 64-bit versions of their scan engines, but there is no ETA at this time.

Each scan engine requires approximately 250 MB of memory. Less memory is required if Intelligent Engine Management (IEM) is not enabled and fewer than 5 engines are selected.

Considering that each scan engine is runs in its own discreet process, there may not be much of an advantage running 64-bit, anyway. 32-bit scan engines also mean that they can be used on the 32-bit non-production versions of Exchange for testing. Even so, I'd rather see the Forefront Team create a 32-bit version for testing and a 64-bit version for production once the AV vendors have 64-bit scan engines.
by Jeff Guillet - @expta at 7:58 AM