How to Remove Internet Explorer from Windows Computers and Servers 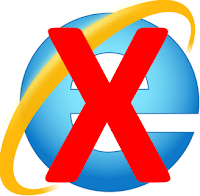 Even so, Internet Explorer 11 is still installed as the default web browser with every version of Windows and Windows Server. To make matters worse, Windows 10 also shipped with non-Chromium Edge (now called Legacy Edge). You'll need to download and install a "modern" web browser, such as Microsoft Edge, Google Chrome, FireFox, etc. Keep in mind that you can reload Internet Explorer sites with IE mode in Microsoft Edge.

Even with ChrEdge (my name for Chromium Edge) installed as the default web browser, I've heard from a few customers that IE is still being used for some web work flows. For example, a customer recently showed me this MFA security confirmation prompt that is opening in IE for some reason. 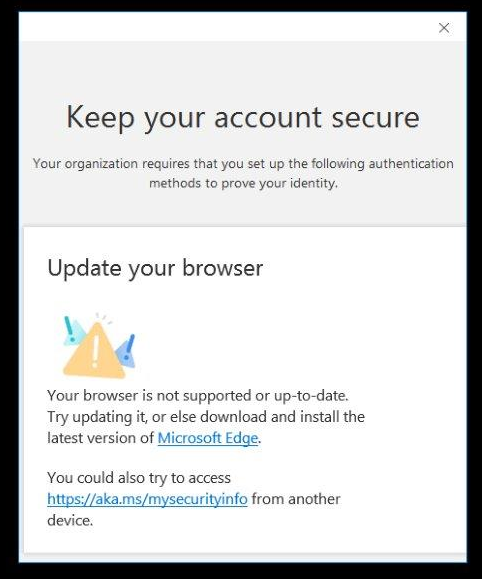 All this leads me to the task at hand. How do you uninstall Internet Explorer 11 from Windows?
This is not straight forward since IE 11 is part of the Windows installation. It cannot be removed as a Windows application or feature. The answer is to use DISM (Deployment Imaging Servicing Management) installed with all versions of Windows and Windows Server.

Run the following command from an elevated CMD or PowerShell prompt:

Removal only takes a few seconds and the output looks like this: 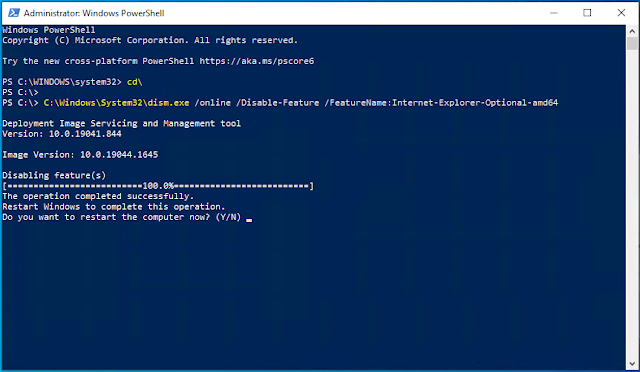 DISM will prompt you to restart the computer to complete the operation. Until you do, Internet Explorer will still show as an available web browser. Optionally, you can add the /Quiet switch which will not show DISM uninstall progress and will automatically restart the computer when it's done.
Read more ...
by Jeff Guillet - @expta at 9:48 AM No comments:

As a best practice, I've always created a scheduled task on my Exchange Servers that starts all stopped services 1 minute after server startup. This is useful for virtualized environments where servers restart much faster than physical environments. Often the VM comes back up before the network has fully initialized. When this happens, some of the Exchange services do not start properly.

This scheduled task is becoming important with the release of the January 2023 Exchange Server Security Updates. There is a known issue that Microsoft Exchange AD Topology service may not start properly on Exchange 2016 servers running on Windows Server 2012 R2. Microsoft is investigating.

I've seen this happen on several of my customers' environments. Since almost all Exchange services rely on the AD Topology service, none of the Exchange services will start. You are required to start all the services manually after every reboot. Instead, you can install the scheduled task that does this for you. 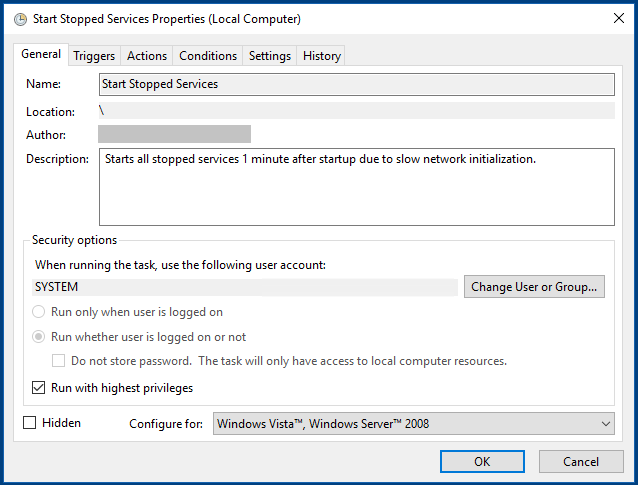 Run the following from an elevated PowerShell or EMS prompt:

It's safe to install this on any Exchange server.

Turning off Basic Authentication for Autodiscover in Exchange Online

Much has been said and written about disabling Basic Authentication in Exchange Online, and for good reason. Basic Auth is insecure and makes it easy for bad guys to hack your accounts and access your organization's data.

Microsoft disabled Basic Auth for most Exchange Online protocols in October of this year. Those protocols include Outlook, EWS, RPS, POP, IMAP, and EAS. SMTP Auth was also be disabled in your tenant if it is not being used. Modern Authentication is the secure way to authenticate for these protocols. Congratulations to Microsoft for pulling off such a monumental achievement to help keep customers' data safe!

Next up, Microsoft is going to disable Basic Auth for the Autodiscover protocol. I would argue this is one of the most significant changes to deprecating Basic Auth, since it is continuously used by Outlook and whenever you configure a mail profile on a mobile device that uses ActiveSync. Because of this, it's easy to ignore this traffic when monitoring for Basic Auth usage. It's also a fairly easy protocol for the bad guys to use for password guessing or dictionary attacks.

As with all the other impacted protocols, Microsoft is not turning off the protocol itself, only the ability to authenticate to the protocol using nothing more than a username and password.

Azure AD Connect version 2.1.20.0 released with a new ability you probably can't use yet

UPDATE: Hot on the heels of the last update, Microsoft released Azure AD Connect version 2.1.20 (6 days later) which apparently fixes a bug in the new sync feature described below. If you implemented the custom sync rule described earlier, you'll need to undo it and do it again. <facepalm>

According to the release notes, "We added a new attribute 'employeeLeaveDateTime' for syncing to Azure AD. To learn more about how to use this attribute to manage your users' life cycles, please refer to this article".

Let's break this down.

The support table shows that syncing the employeeHireDate attribute is already supported in Azure AD Connect, so I expect that suspect the configuration is the same. I could not find a similar support article for Azure AD Connect.

Second, the employeeHireDate and EmployeeLeaveDateTime attributes only exist in Azure AD. The on-premises Active Directory schema is not extended to add these two attributes, so the recommendation is to use one of the existing extensionAttribute* attributes an AD to hold these values.

At this time, Microsoft recommends using the extensionAttribute1 attribute for employeeHireDate, but the documentation makes no mention of how to handle the EmployeeLeaveDateTime attribute. See How to synchronize attributes for Lifecycle workflows - Microsoft Entra | Microsoft Learn. I hope this documentation will be updated soon with the missing info and how to handle it if this attribute is already in use in your organization.

You may find that when you add an Exchange server to a DAG that Server Manager shows multiple errors.

The Notification flag at the top indicates "Refresh failed" and Manageability for All Servers shows an error for the remote DAG member saying, "Online - Data retrieval failures occurred". 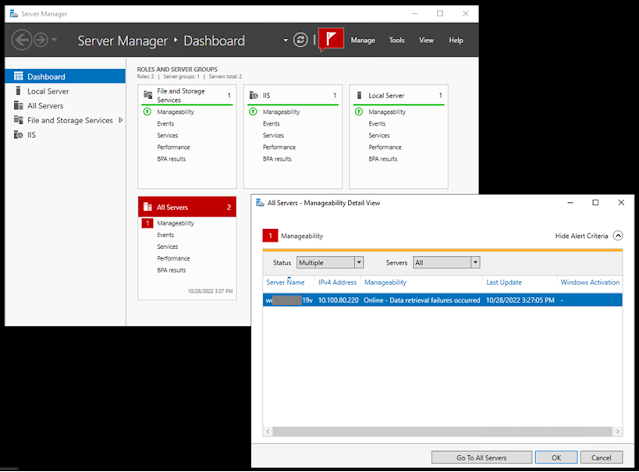 You may also see errors that say, "Configuration refresh failed with the following error: The WS-Management service cannot process the request. The computed response packet size (517916) exceeds the maximum envelope size that is allowed (512000)." 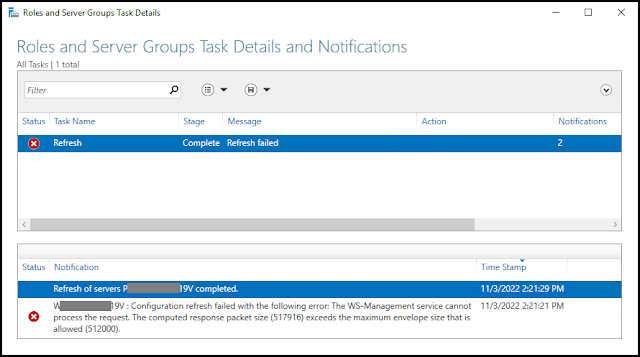 These errors occur when the Failover Clustering feature is installed on the DAG member. I've usually only seen this for Exchange 2019 installed in Windows Server 2019 or Windows Server 2022. This is a Windows Server issue, not an Exchange issue, so this fix should also apply to any Windows cluster experiencing this problem.

The fix is to increase the WSMAN maxEnvelopeSize in the registry on all DAG members.

Finally, restart the Windows Remote Management (WS-Management), aka WinRM, service on the server.
When you refresh Server Manager, the error should go away.
Read more ...
by Jeff Guillet - @expta at 2:52 PM No comments:

There's a bug in Exchange 2019 CU12 and earlier that causes New-MoveRequests for Public Folders to fail.

The move request will fail with the error: StalledDueToMRS_Quarantined, which means that the Mailbox Replication Service (MRS) on the target Exchange 2019 server has crashed repeatedly due to the bug and has quarantined the move request (not the mailbox).

If you check the move request report with the Get-MoveRequestStatistics <PFMailbox> -IncludeReport | FL Report cmdlet you will see the error:

Microsoft is aware of the problem, which will be fixed in an upcoming Exchange 2019 Cumulative Update. It's unknown at this time if the fix will be included in Exchange Server 2019 CU13. 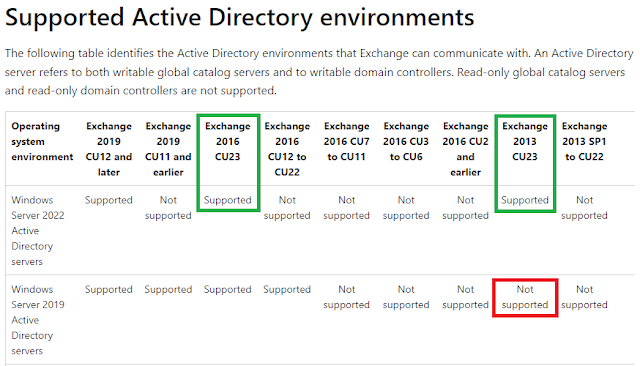 It's interesting to note that Exchange 2013 CU23 does not support Windows Server 2019 Active Directory, so if you're running Windows Server 2016 AD or earlier you should plan accordingly. There are no issues upgrading AD directly from a previous version to 2022, bypassing 2019 AD.