Can you view your Exchange 2010 email archive via ActiveSync? 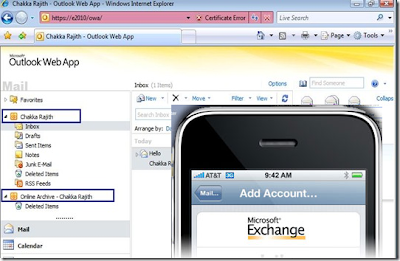 I received an interesting question today from a reader that I thought I'd share:


"Can you view your Exchange 2010 email archive via ActiveSync?"

The answer is usually no, not currently.  The reason is because  the Exchange 2010 archive is really a separate mailbox on the mailbox server, and ActiveSync usually cannot access more than one Exchange mailbox at a time.

There are a few phones (the Droid and jailbroken iPhones) that can access more than one Exchange mailbox at a time.  The new iPhone 4.0 OS that will be released later this year will be able to do this, too (can't wait!).

The question that I can't answer is whether or not these particular phones can have more than one Exchange ActiveSync mailbox on the same server.  Exchange 2010 SP1 will allow you to put the archive on a different Exchange 2010 SP1 server (thereby making Exchange archiving actually useful).  Exchange ActiveSync creates a connection partnership between the user's AD account and the EAS device.  Each ActiveSync mailbox requires a unique ActiveSync partnership (detailed in my post, here), so unless the archive mailbox can host a different partnership and you can access it directly, it probably won't work.

I created an archive on Exchange 2010 SP1 beta and the archive does, indeed, show as a separate associated mailbox in MFCMapi.  However, I don't see any way to reference that mailbox directly using ActiveSync.  That seems to be the only barrier to accessing the archive using ActiveSync, assuming your version of EAS allows more than one EAS account.  Perhaps Microsoft will consider this before SP1 is released later this year.
by Jeff Guillet - @expta at 2:57 PM