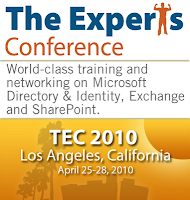 Let me start off by saying that last night's attendee reception was pretty good.  Nice large space to mingle in, plenty of adult beverages and huge screen gaming (Wii and XBox) in each corner.  Which reminds me, if you ever find yourself in a firefight you do NOT want me to watch your back.

So, this morning started off with a session entitled, "NDA Required: Exchange Administration Experience."  Sounded promising.  Maybe we'll hear about some new administrative tools tools and features and find out what's going on in Microsoft Skunkworks.  Not exactly.  After signing the required NDA to enter the conference room we found that the session was all about Microsoft asking for user experience in user provisioning.  All take and no give.  Most people I talked to were expecting a lot more from this session.

Things picked up from here, however, with a great session by Brett Shirley (Microsoft) on "Extensible Storage Engine (ESE) Database Corruption".  Brett walked through the different types of database corruption (logical and physical).  He also explained some of the more arcane switches used in ESEUtil and how you can get into trouble using some of them.  He showed examples of real ESE application errors and what each one really means.  This was a really good session.

Next was a session entitled, "Exchange Server 2010 Design Validation" by J. Hasslauer.  This session covered all the tools you can use to validate your Exchange 2010 hardware and design.  Tools covered included IOMonitor, Exchange Load Generator 2010, and Microsoft Exchange Server Jetstress 2010.

One of the things I really like about conferences like this is meeting and talking with others.  We had lunch with Ilsa Van Crieknge (formerly read on MSExchange.org, now with Microsoft), Michael B. Smith, and Brett Shirley.  It was great talking with these folks and seeing the interaction between them.

After lunch, I attended "What Really Happens During Critical AD Operations" by U. Simon-Weidner.  This session was a deep-dive into the internal operations that occur during an Active Directory schema update, domain update, and other AD operations.  There was a lot of technical detail in this session and it was very well attended.

Next was another session by Ross Smith IV (Microsoft) entitled, "Storage in Exchange Server 2010".  Here, Ross covered the significant improvements included in Exchange 2010 and SP1 that enables organizations to use JBOD (just a bunch of disks) as an enterprise storage solution instead of expensive SAN storage.  In this storage model, each disk contains 1 database and its associated logs (no RAID).  I firmly believe that this is a game changer in Exchange storage design and should really be considered.  Of course, my SAN storage vendor friends vehemently disagree with me, but it makes a good lunch time topic.

Finally, the day ended with a Birds of a Feather session in one of the large ballrooms. Here, attendees got to talk with Exchange experts and ask specific questions they have.  Topics included migration, archiving, regulatory compliance, etc.  It was very interesting to hear the questions and pain points that other customers have and how they can deal with them.