Tuesday, June 15, 2010
As you are no doubt aware, Exchange Server 2010 SP1 Beta was released during TechEd 2010.  Since this is a beta, the documentation has not been released, but I wanted to point out a couple of new things in SP1.
First, Exchange Server 2010 SP1 will automatically install prerequisites for new installations.  There's no need to install the required roles and features before you install Exchange 2010.  The only exception to this is the prerequisite for .NET Framework 3.5 SP1, which is required for setup to run.  Simply tick the checkbox for "Automatically install Windows Server roles and features required for Exchange Server", as shown below: 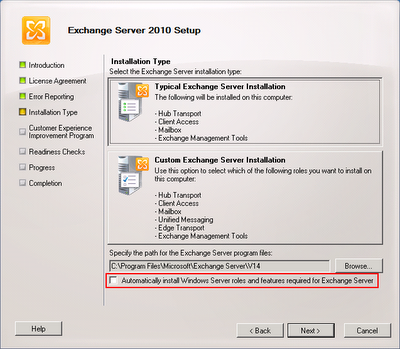 By the way, I've found that quite a few customers didn't know that you can install Exchange directly from the SP1 update bits.  There's no need to install Exchange 2010 RTM and then upgrade it to SP1.
The second new automation feature pertains to Microsoft Forefront Protection 2010 for Exchange Server.  In previous versions of setup, you were required to manually stop and decouple FPE 2010 from Exchange before running the upgrade as described in KB775214.  This is now handled automatically during setup, as shown below: