Monday, September 13, 2010
Fellow MVP Andrew Cheng raised an interesting question in the Forefront Protection 2010 for Exchange Server forum.  He wanted to know how FPE handles encrypted emails and whether it will delete or block these emails if it's configured to delete encrypted compressed files. 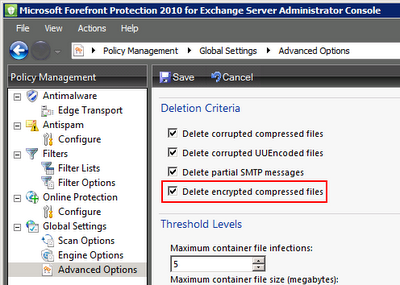 Here are the results of my tests, all were sending emails to an Exchange 2010 user protected by FPE 2010. FPE was configured to delete encrypted attachments, as described above.
By the way, I used free secure email certificates from Comodo to perform these tests.  I highly recommend them, as they're easy to request and install.  Oh, and did I mention they're FREE?
by Jeff Guillet - @expta at 11:47 AM