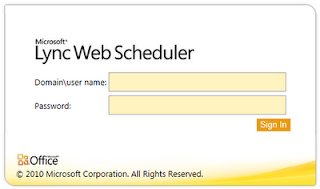 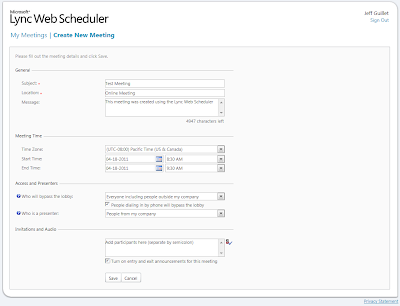 Lync Web Scheduler is a resource kit tool for Microsoft Lync Server 2010. It provides a Web-based alternative to the add-in for the Microsoft Office Outlook messaging and collaboration client for the purpose of scheduling a meeting using Lync Server 2010. It also provides a browser-based conference management experience that includes operations such as the following:
Compared to the Conferencing Add-In for Microsoft Outlook, Lync Web Scheduler has the following limitations:
Lync Web Scheduler is an ASP.NET application, which must be installed on the same Internet Information Services (IIS) Web server on which Lync Server Web Components are installed.
Get it at http://www.microsoft.com/downloads/en/details.aspx?FamilyID=b7d8f948-fa64-4c51-8b54-2223954d1fa4
by Jeff Guillet - @expta at 7:47 AM