Wednesday, March 7, 2012
Earlier I reported that TechEd 2013 will be in San Francisco.  It seems that may not be accurate.

Microsoft evaluates multiple cities and locations when planning its events. Currently, no contracts have been signed for TechEd North America 2013, and the destination has not been finalized. We are looking forward to seeing customers in Orlando at TechEd 2012 this June.

Usually one of the most anticipated pieces of news each year at Microsoft TechEd is where the location will be for the following year. Usually we have to wait to get the conference guide and see the pitch for the next year to find out. Not this year.

Someone on Twitter, @PeterConrad4, passed along a link from the Moscone Center web site that shows TechEd 2013 will be in San Francisco! Dates for the conference will be May 6-9, 2013, in Moscone North, South, and West. This will be the first time the conference has been held in the City by the Bay. 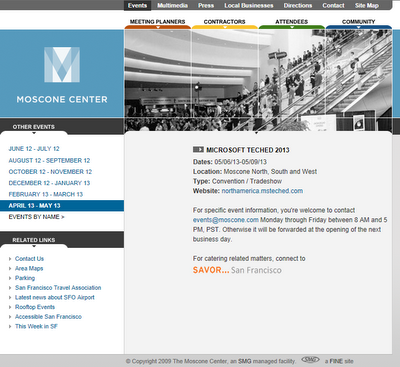 Right in my own backyard!  Awesome, except for the fact that I'll probably have to drive to it every day.  :(