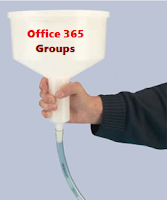 Beginning March 2017, Microsoft will begin creating Office 365 Groups for certain managers unless you opt out.

The article goes on to explain how to opt-out and how to identify Groups that have already been automatically created. Not to be a Luddite or anything, but I prefer that I make my own changes in my environment, thankyouverymuch.

It's important to note that these new auto-created groups are not dynamic. That means that if a manager's direct reports change for any reason (hires, fires, promotions, etc.) the direct reports group membership will not change automatically. Clearly, this new "feature" was only added to hit some metric Microsoft is measuring for Groups "adoption".

To opt-out of automatic Group creation you'll need to run some remote PowerShell. Connect to Exchange Online PowerShell and run the following cmdlet:

Microsoft is all about consumption these days, which is why you can expect an opt-out model as opposed to opt-in for new features. I'm interested to know how you feel about that. Use the comments section below.