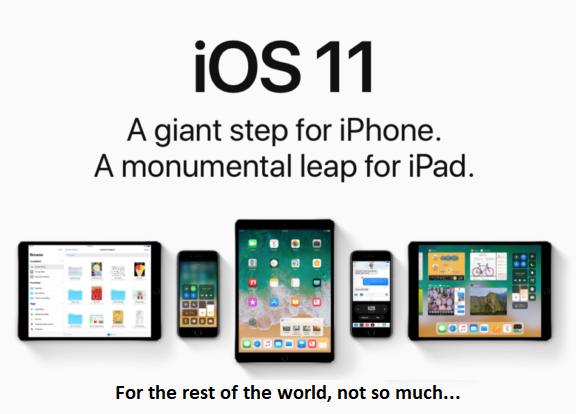 Apple is scheduled to release iOS 11 on September 19th for iPhones and iPads. And there was much rejoicing.

First up, iOS 11 introduces an Exchange ActiveSync error when connecting to an Exchange 2016 running on Windows 2016. iOS 11 improperly negotiates HTTP/2 TLS connections for EAS. See Michael B. Smith's article on this issue and another issue about Intune for more details.

The workaround is to temporarily(!) disable HTTP/2 TLS for Windows 2016 with the following registry keys and then reboot the server:

HKEY_LOCAL_MACHINE\System\CurrentControlSet\Services\HTTP\Parameters
Note: This problem only affects Exchange 2016 running on Windows 2016, since HTTP/2 TLS is the default protocol on this OS. Apple has acknowledged the issue with iOS 11 and is working on a fix. There is no estimate of when this will be fixed but it is expected as an iOS 11 update.

UPDATE: The HEIC file format issue described below may be a non-event. Apple says that iOS will transcode HIEF images and videos to compatible JPEG versions if the receiver cannot indicate it can handle these file types. Transcoding requires a fair amount of compute cycles, which is why HEIF formats are the default on A9+ processor devices. Thanks to @invalidcanary for the heads up.


You should also be aware that the default picture format for iPhone 7/8/X is changing to a new high efficiency image file format (HEIF), called HEIC. With iOS 11, Apple added an option to compress photos and videos with a new, more efficient encoding called HEVC. By default, iOS devices with A9 and newer processors (Apple 7/8/X, iPad Pro and 2017+) will capture images and video using HEVC compression.

The new photo and video formats result in files about 1/2 size of the old JPEG and video formats, while having better quality. The problem is that new files will likely not open properly outside of your iPhone or iPad until everything that you use to work with photos updates to work with new HEIF formats.

To check if your iOS 11 device uses the new format, go to Settings > Camera > Formats. "High Efficiency" is the new format and "Most Compatible" is the old / current format. I do not suggest to just turn this off; Hey - getting files half the size is super cool. Just realize that if you use the photos outside of your phone that there might be temporary issues with viewing.

When this sample 1.3MB HEIC photo is converted to JPEG format it becomes 2.3MB.

Special thanks to Nino Bilic at Microsoft (a real gem of a guy) for the heads-up on this and allowing me to share it with you.