How to Configure Default Settings for Lync 2010 Meetings 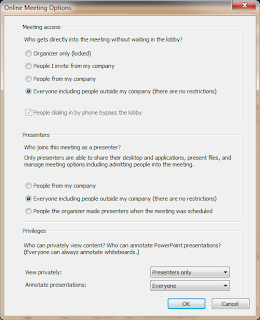 Out of the box, all Lync meetings have the following default properties:
While most of these settings can be configured individually using the Lync client (see above), you may find it better to configure these default settings on the Lync server.

With a public meeting (the default) the conference ID and the meeting link remain consistent each time the meeting is held.  That means if you schedule back-to-back meetings, folks in your second meeting might call in early and end up on the first meeting.  If you don’t enable entry announcements, then you're really in for some surprises!

With a private meeting, the conference ID and meeting link change from meeting to meeting.  To change your default meeting type to private, execute the following command in the Lync Management Shell (LMS):

To configure anonymous (unauthenticated) users to be placed in the lobby, rather than automatically join a meeting, execute the following command.  These users remain on hold in the lobby until a presenter admits them to the meeting.

To place PSTN users in the lobby, rather than automatically join the meeting, run this command:

Presenter settings can be configured using the following command and appropriate switch:

If you want to configure all meetings to automatically announce when attendees enter or exit meetings by default, execute the following command:

Using these commands you should be able to configure the default settings for your company meetings just the way you want.
by Jeff Guillet - @expta at 7:38 PM