Monday, November 22, 2010
There are many reasons why you may need to use a port scanner to check if a TCP or UDP port is open.  Microsoft has a little known utility called PortQry that allows you to perform basic port scanning from the command line.

Download the PortQryV2.exe package and run it to extract the PortQry.exe program, EULA and readme file.  I typically copy PortQry.exe to my %SystemRoot% folder so I can run it from any directory.

Here are some examples of how to use PortQry from the command line:
PortQry can also be run in silent mode using the -q switch.  The program exit with a returncode of 0 if listening, 1 if not listening, or 2 if listening or filtered.  This is useful for batch file processing.
Read more ...
by Jeff Guillet - @expta at 9:54 AM 1 comment:

At the Lync Server 2010 Launch

I'm attending the launch event for Lync Server 2010 at the Microsoft offices in San Francisco this morning.

Microsoft is presenting a virtual launch event November 17 on the Lync Server website.

Don Brooks is here giving a great hands-on demo of the Lync 2010 client with mutliple ad-hoc remote users.  Really good demo and is very much like the one that we do for clients at ExtraTeam.  The integration of Lync with all things Microsoft has to be seen to be believed.  It's just so organic and easy to use.

Several vendors are here showing off their new product, including Jabra, Plantronics, and Audiocodes.  There are some really cool phones coming out for Lync - a few of them are already available.  The rest will be avaiable very soon.  Here are some examples:
﻿
﻿﻿
﻿﻿
﻿﻿
I really like the new Plantronics Calisto (above).  It's a slick looking touchscreen speakerphone with a remote microphone on the sidecar shown, which can be used to clip to a presenter.

Jabra has a new omni-directional speakerphone with touchpad control in the ring around the speaker.  Very easy to use.

Our company is doing several POCs and full deployments even before the product officially launches.  Very exciting!  I'm looking forward to attending Lync Ignite here in San Francisco in January.
Read more ...
by Jeff Guillet - @expta at 10:06 AM No comments:

Thursday, November 11, 2010
All versions of Outlook since Outlook 2003 have had a feature called Auto-Complete.  Auto-Completion "remembers" recipient names and email addresses that you have used before and offers to complete the email address as you type characters.  This works within Outlook and OWA 2010. 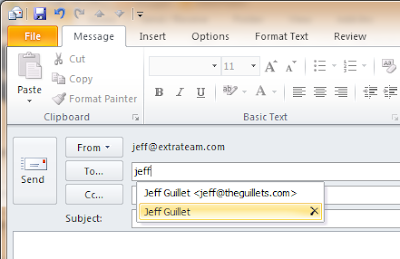 In Outlook 2003-2007, the Auto-Completion (aka NickName) data is stored in a hidden N2K file.  This file is located in the following path:

This can usually be shortened to:

This article discusses how to migrate the older format N2K file to the new format on a new computer.  This is helpful for when a user gets new hardware and wants to maintain their current Auto-Complete data.  A good example is when an executive using Outlook 2007 gets a new laptop with Outlook 2010 pre-installed.

Sunday, November 7, 2010
You may recieve an error when logging in to the Lync Server Control Panel for the first time from a computer or even the Lync server itself.

When you launch the Lync Server Control Panel Silverlight application from the Start menu or open https://lyncserver.domain.com/cscp in Internet Explorer, you must enter a username and password for an account that is a member of the CSAdministrator group in Active Directory.  You may then receive the following IIS error:

This happens when the https://lyncserver.domain.com/cscp website is not in the computer's Trusted Sites zone.  Here's how to fix it: 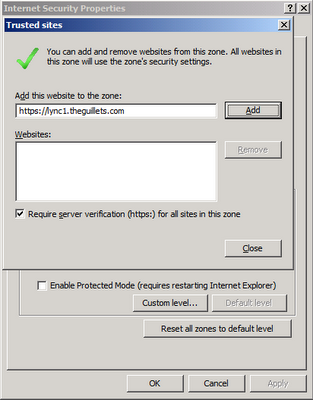 Now you will be able to access the Lync Server Control Panel from both Internet Explorer and the Silverlight application on that computer.
Read more ...
by Jeff Guillet - @expta at 4:51 PM 9 comments:

Sunday, November 7, 2010
You may find that you are unable to move certain users to a new Lync Server 2010 registrar pool.  When you select the user and then choose Move selected users to pool from the Action menu, you enter the Destination Registrar Pool and then receive the error, "Failed while updating the destination pool". 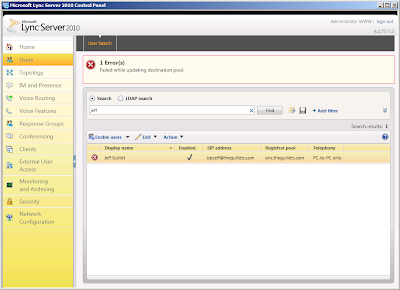 If you select the "Force" check box, you receive a slightly different error, Active Directory operation failed on "dc.domain.com". You cannot retry this operation: "Insufficient access rights to perform the operation 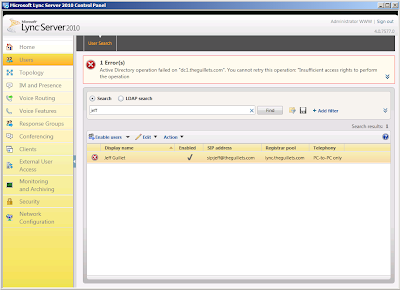 This happens when the user you are trying to move is a member of a Windows Builtin group, such as Domain Admins.  When a user is a member of one of the special Windows built-in groups, Windows will automatically remove security inheritance on that user.  To complete the move, you must reapply inheritance. 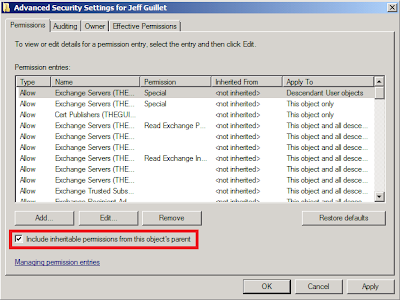 Be aware that Windows will automatically remove the inheritance setting again within a few minutes as long as the user remains a member of the Windows built-in group.
Read more ...
by Jeff Guillet - @expta at 3:36 PM 5 comments:


Use this stencil to create Visio drawings that contain Exchange 2010 objects. These shapes include icons for the following: 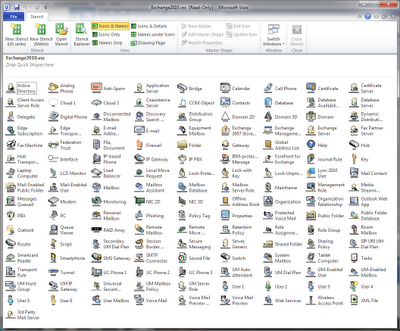 This download works with the Microsoft Office Visio 2003 or later.