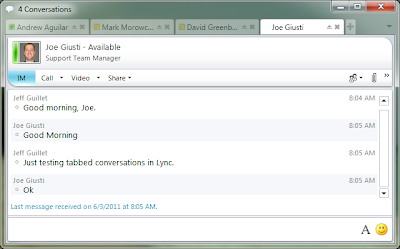 This is a separate application from Lync 2010 and must be launched after the Lync 2010 client is launched.  If you close Lync, you'll need to launch it again.  See the Tabbed Conversations for Microsoft Lync 2010 Getting Started Guide for more details.

Once you start the application and you start an new IM for the first time, Lync briefly opens a normal IM window and then replaces it with the Tabbed Conversations window (above).  It then works exactly as the normal IM conversation window, with a few additions.

As expected, you can only do one screen share per tabbed IM conversation at a time, but you can have multiple contacts in that conversation.

It would be nice if the integration was a little smoother.  I don't like having to open the application after I launch Lync, and the way it briefly shows the normal Lync IM window before it kicks in is a little annoying.  But overall I like the way that it decreases the surface area of Lync, especially on smaller screens.
by Jeff Guillet - @expta at 8:29 AM