Saturday, January 28, 2012
UPDATE: I wrote an updated article, UPDATED Blistering Fast Hyper-V 2012 Server - Parts List and Video! which includes the new 3rd generation Intel Core I5 processor, faster RAM, and multiple SSDs -- All for under $1000! Check it out now!

Walk with me now, as we take a stroll down Geek lane.  :)

I decided it's time to replace my old Hyper-V server at home with a new one that's faster and can run more VMs.  I've decided again to build it myself from OEM parts so I can get exactly what I want at a right price.  This article contains my parts list and my reasons for choosing what I did.  Hopefully, this will help you with your own home lab.

I host my private cloud network on a Windows Server 2008 R2 Hyper-V host server.  Hyper-V is perfect for my environment because it allows me to run workgroup applications (Exchange Edge Transport and IIS) directly on the host, as well as host my virtual domain servers. 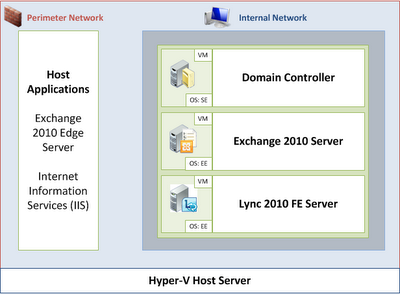 My current Hyper-V server is an AMD x64 dual core rig with 16GB RAM and two SATA drives, one for the OS and another for VMs.  I built it about 3 years ago when I was on the Windows Server 2008 TAP and it has served me well.  But with Windows Server 8 and Exchange 15 right around the corner, I wanted to be sure I had the capabilities of running these new versions.

My Design Requirements
As with most customers, I have competing requirements for this new server:
My RAM requirements drove most of this design.  Since this would be based on a desktop motherboard (server mobos are too big and ECC RAM is too expensive), I first looked for 4x8GB (32GB) DDR3 RAM.  Then I looked for a small mobo that would accept that much RAM, then a processor for that mobo.
Here's my parts list, including links to where I purchased each item and the price I paid:

[Update: See my comparison of Western Digital Caviar Black and Green drives. The trade off is ~$100 and more noise for better performance.]
I was a little worried about the Komputerbay RAM.  I've never heard of them before, but they offer a lifetime warranty and 32GB DDR3 1333 (PC3 10666) RAM was $54 cheaper than what I could find at NewEgg.  In the end I'm very pleased with my decision.
I chose different sources for the best price.  NewEgg is my go-to vendor for most items.  They charge sales tax in California, but I have a ShopRunner account that gives me free 2-day shipping on all these items.  Amazon was the smart choice for the bigger ticket items since they don't charge tax and I could get them delivered with a 30 day free trial of Prime 2-day shipping.  Not to mention the fact that I had a $500 Amazon gift card that I won at TechEd 2011 from my good friends at Vision Solutions!  TigerDirect was the only source for this great AeroCool micro ATX cube computer case.
All the items were delivered the same day and started putting it together that night.  Careful assembly took about 90 minutes and everything went together perfectly.


The only other item I added was a dual port Intel PRO/1000 MT Server Adapter that I already had.  I also used L-bend right angle SATA cables instead of the two that came with the Intel motherboard, due to the short clearance between the PSU and the back of the drives (I knew this going in).
The innovative AeroCool M40 micro ATX case opens up likea book for easy access.  The power supply, hard drives and DVD drive(s) are in the top half and everything else is down below.  It includes a nearly silent 120mm front fan and has room for one more on the top rear section and two 80mm fans on the bottom rear section.  I added a single silent 80mm fan on the bottom to push warm air out.  The case temperature has never gone above 26.4C and it's completely silent.

I'm using the OCZ 120GB SATA III SSD drive for the operating system and pagefile, Windows Server 2008 R2 Enterprise for now.  I'll upgrade the server to Windows Server 8 when it goes RTM.  In the meantime, I'll build and test beta versions as VMs.  I have to say that this SSD drive was one of the best choices for my new system.  It's blistering fast!  Windows Server 2008 R2 SP1 installed in just 6 minutes!!  Take a look at the video below to see that it takes only 20 seconds to get to a logon screen from a cold start, and half of that time is the for the BIOS POST!

The Intel I5 4-core Sandy Bridge processor has amazing graphics built in.  I'm able to run Windows Server 2008 R2 with the Aero theme at 1920x1080 HD resolution with no difference in performance.  It's possible to overclock this system, but it's plenty fast for me and I value stability over speed.  I love the fact that it draws only 65W!  This not only saves electricity, it keeps the case cool which lowers the cooling requirements.

As a desktop motherboard, the Intel DH67BL motherboard came with drivers that did not work out of the box with Windows Server 2008 R2.  I downloaded the latest drivers from Intel and most installed fine.  The only items I had trouble with were the built-in Intel 82579V Gigabit network adapter and the integrated Intel HD Graphics drivers.  Intel "crippled" the NIC driver installer so that it won't install on a server platform.  See this article which explains how to re-enable it.   The video driver installed most of the way, but the installer crashed when trying to register a DLL.  It was able to install again fine after a restart.
I also used a Western Digital Green 2TB SATA III drive for storage of my Hyper-V VMs.  I've always used Western Digital drives and I've never had a problem with them.  The WD Green line saves power, runs cool and quiet, and delivers 6 Gb/s performance.

This is by far the fastest server I've ever worked on, bar none.  I'm extremely happy with it.  I haven't bothered running any benchmarks* on it – I just know that it's fast enough for my needs and has plenty of RAM so I can run more VMs.
I hope this article helps you to build your own home lab server.   Please let me know if you have any questions.
* There are lies, damn lies, and benchmarks.

UPDATE: I wrote an updated article, UPDATED Blistering Fast Hyper-V 2012 Server - Parts List and Video! which includes the new 3rd generation Intel Core I5 processor, faster RAM, and multiple SSDs -- All for under $1000! Check it out now!