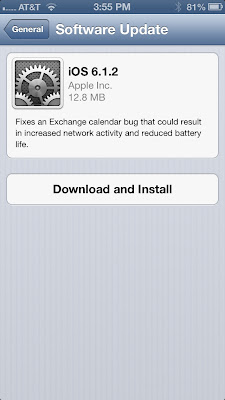 Apple released iOS 6.1.2 today to iPhones and iPads.  This update supposedly fixes the Exchange calendar bug that can result in increased logging in Exchange 2010.  This bug has been well documented by Microsoft and technology professionals like fellow MVP Tony Redmond.

The update is also supposed to address reduced battery life due to excessive network utilization.

I recommend installing this update on your iOS devices as soon as possible.  Hopefully it doesn't break something else.