Tuesday, June 28, 2016
It's fairly easy to determine the version of Exchange Server running on a server using the Exchange Management Shell. The following cmdlet will display the Exchange version for each server in the organization, according to Active Directory: 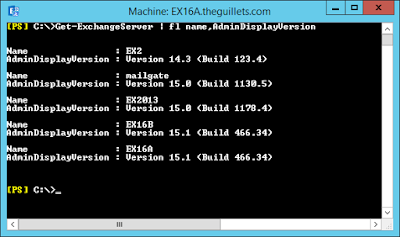 The AdminDisplayVersion value tells you the Exchange version using the following ww.xx.yyyy.zzz format:

But what if you don't have easy access to EMS, or you want to check the version of the Exchange Server your mailbox is hosted on in Exchange Online for some reason?

If your on-prem Exchange 2013/2016 organization is using MAPI over HTTP (and you really should be) you can use the following URL to check which version of Exchange is running on the server hosting your mailbox:

The output will show the server version number, as shown below. 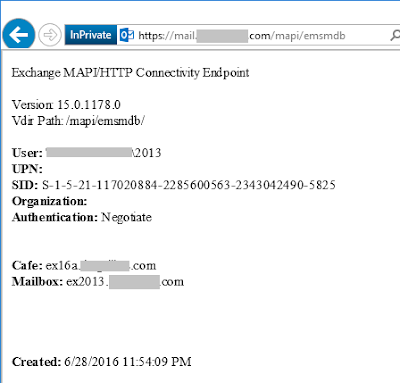 The cool thing about this method is that even works externally as long as Outlook Anywhere is published to the Internet. Keep in mind that the version returned is for the server hosting the mailbox being accessed, not the front-end client access proxy server. You can tell which front-end CAS your hitting by observing the Cafe server value.

Note that this method won't work if you haven't configured MAPI/HTTP or for mailboxes hosted on Exchange 2010 or earlier because they don't support MAPI over HTTP.