Script to Force Download of the Lync 2010 Address Book

Thursday, February 24, 2011
I wrote a script (batch file, really) that users can run to force a download of the Lync address book. 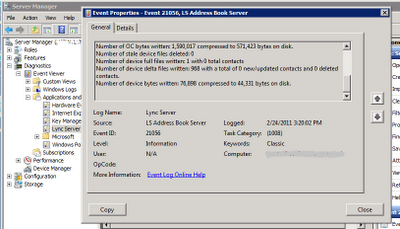 The address book is then downloaded locally by the Lync client in a randomized schedule from 1 to 60 minutes after the the user signs in.  Lync Server MVP Jeff Schertz wrote about this process in great detail in his post, Updating the Lync 2010 Address Book.

My script sets a GALDownloadInitialDelay key in the registry to force the Lync client to download the address book immediately after signing in.  It then enumerates all the SIP_* folders in the C:\Users\username\AppData\Local\Microsoft\Communicator folder and deletes the GalContacts.db and GalContacts.db.idx files which make up the Lync address book.

Save the script above as ClearLyncAddressBook.bat and run it from an elevated Command Prompt.  Then sign out and back into Lync and the address book will download immediately.