Lync 2013 now features a larger contact photo for meeting participants.  It scales those small 96x96 pixel thumbnailPhotos up to 278x278 pixels, which results in a blurry, but still usable, photo.

The new high-res photos used by the Wave 15 products (Exchange 2013, Lync 2013, SharePoint 2013, and Office 2013) are now stored in the user's Exchange 2013 mailbox and are accessed using Exchange Web Services (EWS).  This makes a lot of sense since Exchange is installed in almost all of these environments.  Lync 2013 now allows for photo sizes up to 648 pixels by 648 pixels - a 700% improvement!  Just look at that handsome devil!

The following script sample can be used to store a 648 by 648 pixel photo in Ken Myer's Exchange 2013 mailbox:

Notice in the Lync 2013 example above that there's a button to allow users to edit or remove their picture.  That button only lights up in Lync 2013 if the user's mailbox is hosted on an Exchange 2013 server.  There is no "self-service" way to upload pictures with Exchange 2010, although it can be done from SharePoint 2010.

But before you go updating all the photos of employees in your company with new hi-res photos, you should know a few things about backward compatibility.  The Set-UserPhoto cmdlet, which only exists in Exchange 2013 and is used in the script above, not only stores the hi-res photo in the user's mailbox, it also stores a 48x48 pixel version in the thumbnailPhoto AD attribute.  That's half the resolution of the 96x96 recommended size and results in a terrible photo for users on Exchange 2010. 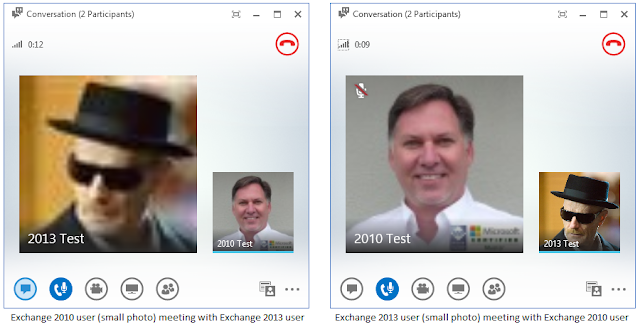 This is really only an issue for customers in an migration scenario, but it's worth noting.  The point is that update Exchange 2013 mailbox users with hi-res photos, you may still want to re-update the users' thumbnailPhoto attributes with better 96x96 pixel photos when you're done.

For more information about high resolution photos used in Lync 2013 see Configuring the Use of High-Resolution Photos in Microsoft Lync Server 2013, but please keep in mind that the script examples in that article have typos in them.  The script above corrects those errors.