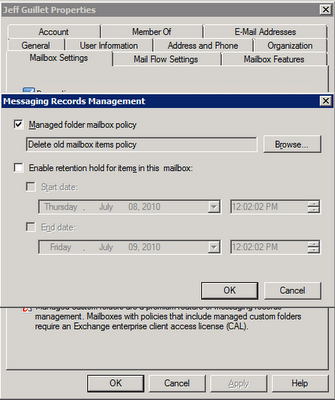 Exchange 2007 provides a way for you to apply message retention settings to default and custom folders in user mailboxes.  This process is called Messaging Records Management (MRM) and is covered in pretty good detail here, so I won't go into details on how to configure MRM.

I wrote a small Powershell script that will apply a Managed Folder Mailbox Policy to all Exchange 2007 users that do not already have a Managed Folder Mailbox Policy configured.  The script also writes an event to the Windows Application event log so you know it ran successfully.  Copy the script to any Exchange 2007 server and run it as a Scheduled Task.

The first line (in red) is where the actual work is done.  You can see there are three parts to this one-liner:

When assigning a managed folder mailbox policy with managed custom folders to the mailbox "contoso.com/Users/Jeff Guillet", Outlook clients older than Outlook 2007 do not have all available client features and clients older than Outlook 2003 SP2 are not supported. You may use the "Set-CASMailbox" task to enable client version blocking. Are you sure you want to assign a managed folder mailbox policy to this mailbox?

Normally, you would suppress a confirmation prompt like this using the -confirm:$false parameter, but that doesn't work for the -ManagedFolderMailboxPolicy parameter for some reason.

The remaining four lines (in blue) are used to write the event to the Application event log.

Save the script above as Set-DefaultManagedFolderMailboxPolicy.ps1 in C:\Scripts on the Exchange 2007 server where it will be run.  Now we need to create a Windows scheduled task.