Wednesday, January 5, 2011
The Office Communications Server 2007 Resource Kit Tools featured a nifty tool called LCSAddContacts.  This WSF script allows you to add contacts to LCS or OCS (but not Lync Server) using WMI.  I was hoping to see a version of this tool for Lync Server, but no such luck -- So I wrote one myself.

I'm surprised to find that there is no PowerShell cmdlet that allows you to add contact groups or contacts, and since there are no WMI classes for Lync Server anymore, I needed a way to do this -- so I wrote a tool myself.  I leverage the DBIMPEXP utility from the Lync Server DVD to import and export contacts. 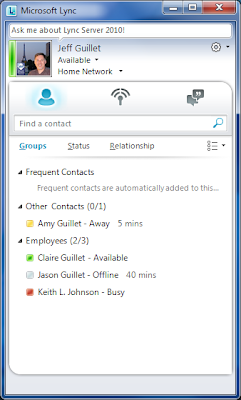 The purpose of LyncAddContacts is to add the same contact groups and contacts to multiple users programmatically.  For example, you may want to import a contact group called "Company Contacts"  that contains contacts for everyone in the company.  Here's how it works:
Prerequisites:
Note: This tool must be run under the CScript host due to the amount of output generated.  You will see a syntax pop-up window if the tool runs under WScript.

The following examples demonstrate how to use the tool.


Use the /backup switch to backup all user data to the specified filename.  The following example backs up user data on a Lync Standard Edition server:

where backup.xml is the backup filename.

The following example performs the same backup on a Lync Enterprise Edition server:

where backup.xml is the backup filename and sql.domain.com is the SQL server used by the front-end pool.
Once the backup has been performed, you can begin the export/import process.

First, you must export the source user's contact groups and contacts.  The following example exports this information from a user named "Source" on a Lync Standard Edition server:

where source@domain.com is the SIP address of the user you want to export.

The following example performs the same export on a Lync Enterprise Edition server:

Second, you import the contact groups and contacts to either a single target user or a target Organizational Unit in your domain.  The following example imports the data to a user named "Target" on a Lync Standard Edition server:

where target@domain.com is the SIP address of the user you want to import the contact info to.  For Lync Server Enterprise Edition you must add the SQL server used by the front-end pool, as shown above.

The following example imports the same contact groups and contacts to all the SIP enabled users in the Users container in Active Directory:

Again, for Lync Server Enterprise Edition you must add the SQL server used by the front-end pool.
In this example, were also specifying the SQL instance LyncServer:

A nice benefit of this tool is that contacts will not get a notification that so-and-so has added them to their contact list.  This is really useful in preventing unnecessary pop-ups from the Lync client.


Disclaimer: I hope that the information in this blog is valuable to you. Your use of the information contained in these pages, however, is at your sole risk. All information on these pages is provided "as -is", without any warranty, whether express or implied, of its accuracy, completeness, fitness for a particular purpose, title or non-infringement, and none of the third-party products or information mentioned in the work are authored, recommended, supported or guaranteed by The EXPTA {blog}. Further, EXPTA shall not be liable for any damages you may sustain by using this information, whether direct, indirect, special, incidental or consequential, even if it has been advised of the possibility of such damages.
by Jeff Guillet - @expta at 10:02 PM