Monday, March 7, 2011
So you've updated your Windows 7 and Windows Server 2008 R2 computers with Service Pack 1 (SP1), and everything is running great.  You've tested your applications and haven't run into any compatibility issues, so now you'd like to delete the Service Pack 1 backup files.  Here's how to do it.


Note: The Service Pack Backup Files allow you to uninstall SP1, rolling the operating system back to RTM.  Once the backup files are deleted, you can no longer roll the system back.  Make sure you have given enough time to ensure that the system is behaving properly with SP1 before deleting the backup files. 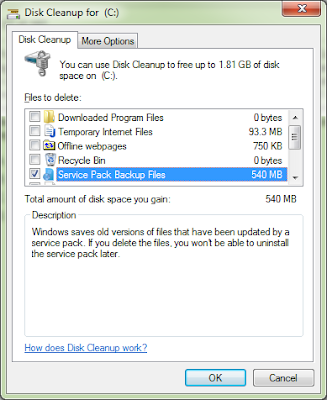 As noted in the comment below, you can also remove the Service Pack backup files using the following command from the command line:

I typically run a disk defragmentation cycle after the SP1 backup files have been removed, since this is a fairly large amount of data to remove.
by Jeff Guillet - @expta at 10:47 AM